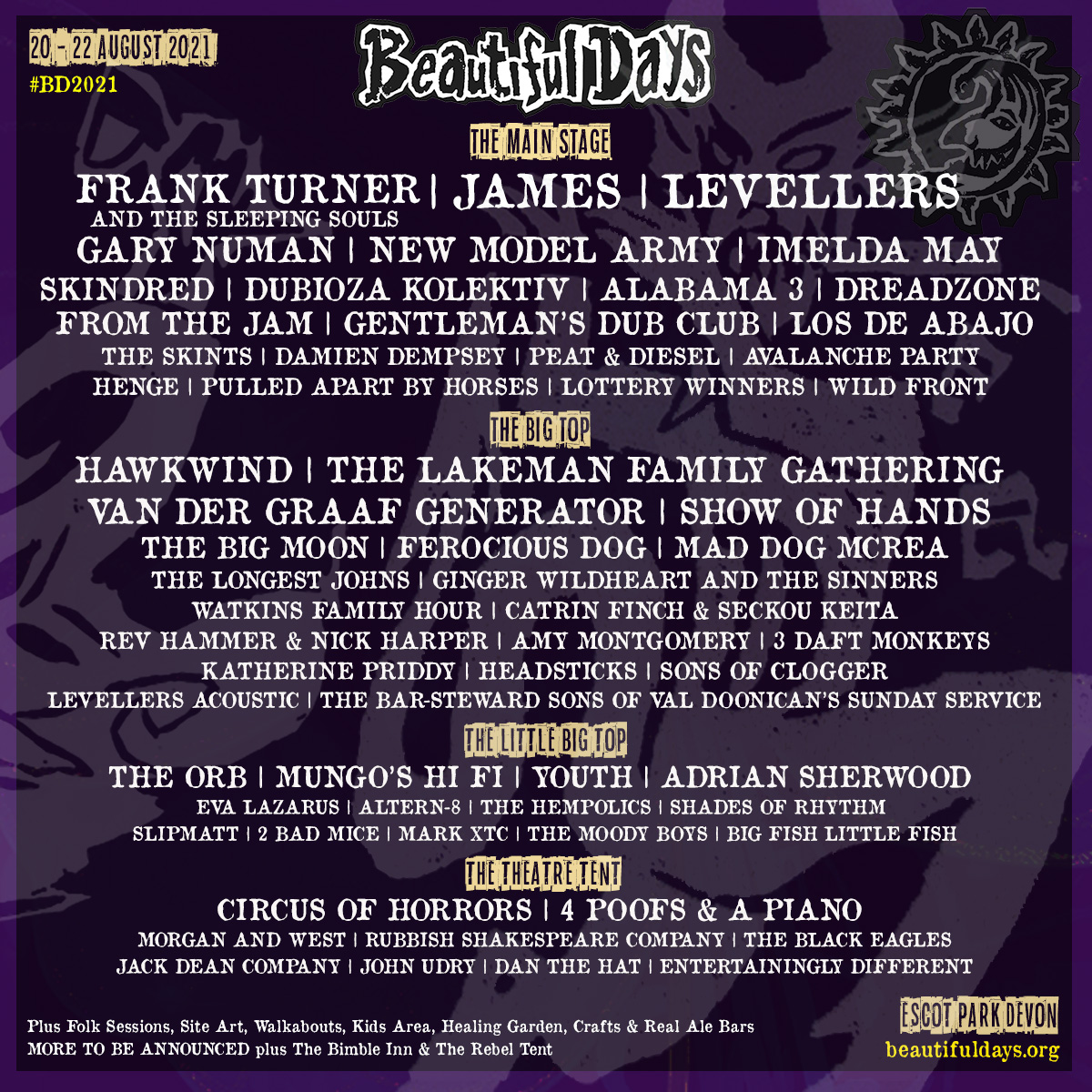 Beautiful Days welcomes back Frank Turner and The Sleeping Souls to headline the Main Stage on Friday night. Over the course of an astonishing career now spanning 20 years + and counting Frank has to date sold in excess 1 million records and played to over 2 million people. He is arguably one of Britain’s hardest working musicians.

Topping the bill on Saturday night are James who return after headlining Beautiful Days in 2016. Since their breakthrough single in 1991, Sit Down, James have released 15 studio albums, selling over 25 million copies in the process. They’ve announced the release their new studio album ‘All The Colours Of You’ on 4th June with new single ‘Recover’ out now.

Festival founders Levellers will close the festival on the Sunday night. The band released new studio album ‘Peace’ in Summer 2020 which entered the UK Official Album Charts at #8 - the band's highest charting entry since 1997's Mouth to Mouth. Levellers will also open the festival weekend with their traditional acoustic set in The Big Top.

Also announced for the Main Stage is icon and pioneer of electronic music Gary Numan, plus New Model Army who celebrated their 40th anniversary last year, Irish singer-songwriter Imelda May, one of the UK’s most formidable live acts Skindred, the Balkan ska punk extravaganza that is Dubioza Kolektiv, punk-rock, blues and country band Alabama 3 and From The Jam led by bassist/singer and original Jam member Bruce Foxton.

Topping the bill on the festival’s second stage - The Big Top – on Friday night are the legendary and pioneering Hawkwind. With founder Dave Brock still at the helm, the band recently celebrated their 50th anniversary.

Saturday night welcomes The Lakeman Family Gathering – an exclusive performance featuring musician dad Geoff Lakeman with sons Sean, Sam and Seth plus Cara Dillon and Kathryn Roberts performing all together for the first time ever.

Sunday night headliners are Van der Graaf Generator featuring Peter Hammill, Hugh Banton & Guy Evans - the three surviving members of the original group formed in 1968. Darker and wilder than most of their contemporaries VdGG were known for sprawling, dense and complex songs on six albums recorded for the Charisma label between ‘69 and ‘76.

The first acts announced for The Little Big Top are The Orb, Mungo’s Hi Fi, Youth, Adrian Sherwood, Eva Lazarus, Altern-8, Shades Of Rhythm (Live), Slipmatt, 2 Bad Mice, Mark XTC, The Moody Boys and family rave Big Fish Little Fish. The seated Theatre Tent will play host to theatre, comedy and dance with shows including the circus that is like no other - Circus Of Horrors, plus the super talented quadruple that is 4 Poofs & A Piano (known for being the house band BBC One chat show Friday Night with Jonathan Ross) and performances from The Rubbish Shakespeare Company, Morgan & West, The Black Eagles, John Udry, Dan The Hat, Jack Dean Company and Entertainingly Different.

Beautiful Days has never just been about the music though – the festival has a seated Theatre Tent, walkabout performances, site art installations, an array of food & crafts stalls and real ale bars run by local brewers Otter Brewery. The 2021 theme is still to be announced!

We are working hard planning to go ahead at full capacity following Step 4 of the Government’s roadmap which hopes to allow large events to take place without restrictions. 95% of tickets have already been sold for the 18th edition of the festival with the last few tickets available.